This demonstration is one in a series of advanced lighting demonstration  projects being completed through a joint initiative between the DesignLights™ Consortium (DLC) and the U.S. Department of Energy. 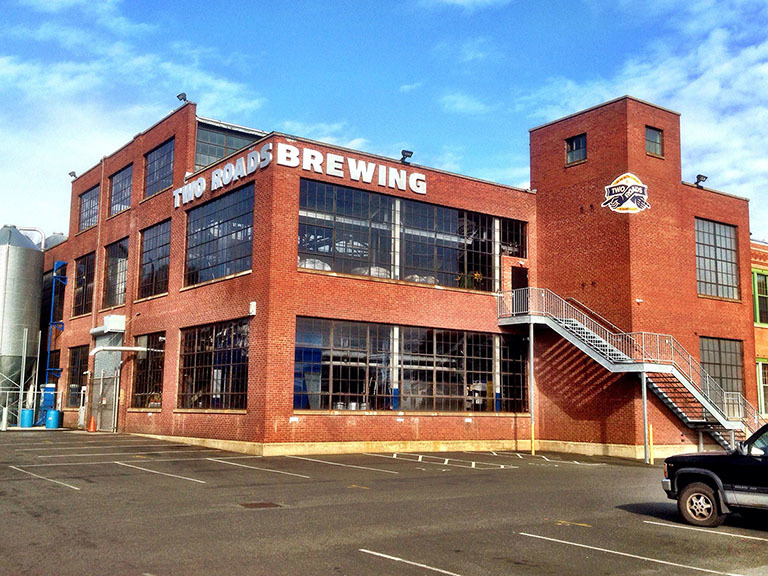 Two Roads Brewing Company, founded in 2012, is a brewery offering new twists on a variety of craft beers from their Stratford, Connecticut location in a renovated 1911, 103,000 ft2 building. The 2012 renovation changed the building into an industrial-scale microbrewery with bottling operations, a tasting room, offices, restrooms, shipping / receiving, and storage. Although the 2012 renovation installed efficient fluorescent technology, the evolution in LED lighting and intelligent controls can offer additional savings. The United Illuminating Company (UI), the local utility, recruited Two Roads to participate in this demonstration. New LED control systems can provide modern convenience with wireless communication, and advanced software options that allow for customization of light levels and schedules to meet application and occupant needs.

The Digital Lumens Intelligent LED Lighting System incorporates lighting fixtures with embedded intelligence that includes occupancy and daylight sensing controls integrated or pre-installed in the new light fixtures. The Digital Lumens LED high-bay and low-bay fixtures were installed in the industrial area, and office areas outfitted with Philips Evokit troffers with pre-installed Digital Lumens controls. Although LED lighting alone offers energy and maintenance savings through long product life and energy efficient design, these benefits can be greatly extended through the use of lighting controls.

The software allows operations staff to manage energy use, optimize lighting to the application thereby supporting employee safety and comfort. Furthermore, the system has automatic measurement and reporting of energy use along with a suite of additional features for optimizing operations.

The Cadmus company measured the lighting system energy use before and after the upgrade to capture the energy usage with and without lighting controls. Replacement of older fluorescents with LEDs alone saved 50.0% of the estimated annual lighting energy use. With occupancy sensing controls, energy savings increased by 9.8%, and daylighting controls saved another 6.8%. Total energy savings for a year is estimated to be over 95,000 kWh. The corresponding reduction in facility energy cost is over $13,800, or more than $138,000 over ten years. Total installed project cost is $158,489; the retrofit will pay for itself in ~ 7 years with the UI utility incentive reduction of 40.0% applied to project costs.

Brewery operations vary with the seasons. Typical operations include 2 production shifts ending at 9 PM, and then limited staff until 7 AM. In production environments, renovation project work must be conducted with minimal disruption and one benefit of embedded, pre-installed sensors and controls is the radically simplified installation process.

Previously, if the facility manager wanted to maximize energy savings with controls they would have to match together different components between light fixtures and controls, determine proper sensor placement, and wire multiple components with potential re-circuiting - effectively adding time and labor costs.

In most areas, the simple technology change to LED fixtures provided the majority of savings. Controls offered additional savings in most areas. Control savings can vary widely depending upon the type of activity and facility function.

The installation contractor who installed the new fixtures found the process to be both simple and similar to installing standard fluorescents; system commissioning required only a few hours to complete as much of the process was automated and is provided by the manufacturer as part of the purchase price.

Facility operations staff reported that the software interface and system was easy to set up and operate. Using the LightRules® software, staff developed advanced schedules and control strategies for each area of the facility, optimizing operations. An additional time saving feature of the system is automatic safety testing and reporting of emergency lighting hardware; in older systems this remains a manual and potentially lengthy process.

Prior to the retrofit, a staff survey found 87.0% had a neutral response (satisfaction) with 2 respondents noting conditions being too bright or dim. Post&dash;retrofit found average satisfaction rising to 93.0% with only 1 respondent noting a packing area being too dim.

Pacific Northwest National Laboratory took measurements in selected areas to compare lighting performance before and after the retrofit. Measurements are in footcandles (fc).

All of the post-retrofit LED illuminance levels generally meet Illuminating Engineering Society (IES) guidelines. The system performed as expected or better with most light levels increasing from 7.0% to nearly 500.0%. Where the increases served to correct previously under-lit areas, high-end trim and task tuning was not possible, and did limit energy savings. However, even with the increased light levels, the improved efficacy and added system controls produced significant savings.