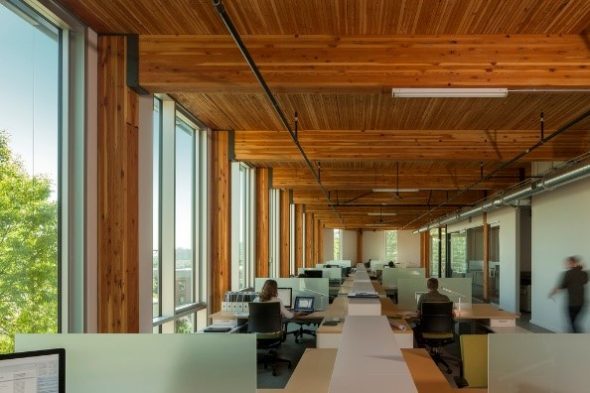 The Bullitt Center is an ambitious experiment to create a new paradigm for 21st century buildings. The realization of this building is a story of how a visionary building owner, an integrated design and construction team, supportive regulatory agents, and progressive financial partners came together with a common purpose to achieve an extraordinary result.

What is the Bullitt Center?

This building manifests the vision of Denis Hayes, president and CEO of the Bullitt Foundation. It was his tenacious advocacy for the idea of a living building, and his conviction that the mission of the Bullitt Foundation would be served well through this large commitment of the Foundation’s resources to create a model for a completely new kind of building, one aimed at catalyzing a radical shift in our thinking about what's possible for buildings of the 21st Century.

How does the building perform?

This is an extremely ambitious goal, all the more for a building aimed to be cost-competitive with other Class A commercial office buildings in Seattle. The Bullitt Center is a work-in-progress, an experiment whose results are just beginning to emerge.

Michael Ballantyne, co-owner of a three-story office building in Boise, had a problem. His anchor tenant’s lease was up and the company was thinking about leaving.

Good Thinking and No Clinkers

A Montana Facilities Manager Puts Innovation to Work for a Hospital.

A City on the Move

Shanghai, Stockholm…Seattle? The Emerald City is rapidly entering the ranks of global cities. The region is home to some of the world’s largest tech companies and there are construction cranes on virtually every corner of the city center.