The figure below is an example of an electric bill.

Example of an electric bill

The total demand and basic charges are nominal compared to consumption (kWh) charges. So, for simplicity, we can calculate unit costs for consumption without deducting the basic or demand charges.

To calculate the approximate, average, unit cost of electricity:

Note: If your utility rate is less than $0.05 per kWh or more than $0.15 per kWh, you may be looking at the wrong numbers. Check again!

The figure below is an example of typical charges on a gas bill. 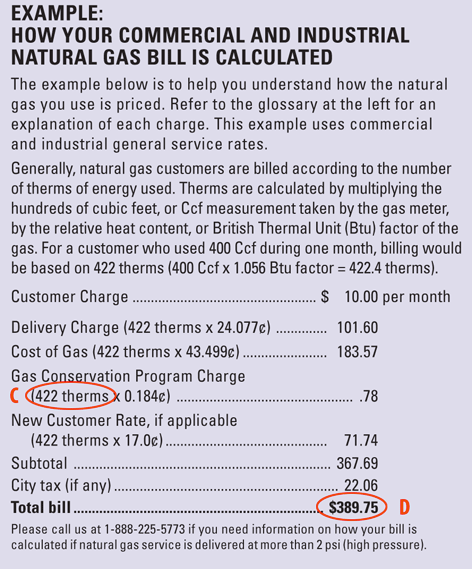 Example of charges on a gas bill

Note: If the gas rate you calculate is not between $0.80 and $1.70 per therm, you may be looking at the wrong numbers. Check again!

Collecting energy consumption data from your utility is the first step in benchmarking. However, you will need additional information to complete the benchmarking process.

Simple Strategies to Maximize the Value of Commercial Energy Benchmarking

You can't manage what you don't measure.

This document aims to help public building portfolio holders understand the benefits of the Public Buildings Portfolio Management process and outline the approach and key lessons learned for those ready to start their own program. The process is applicable to any city, county, regional government, state agency, or school district...