First, familiarize yourself with the design and capabilities of your chilled-water system. Do the pumps have variable-speed drives (VSDs), and if so, are they programmed to take full advantage of the variable-speed capability?

There are many ways to configure the system control to use variable-speed pumping, for example:

Make sure you understand the control strategy for your own system and how it is configured before starting to diagnose problems.

How This Wastes Energy

Keeping the chilled-water pump at an elevated speed requires more power for the pump motor than would be required if the system responded properly to reduced loads.

Possible Causes of This Symptom

The table below shows some of the possible causes of this symptom. The cause of a symptom can be an energy-performance problem that can be fixed, or it may be explained by an unavoidable aspect of your current system that would probably require a capital project to change. Follow the steps described after the table to determine the possible cause of this symptom. If you find a problem, perform the suggested trend logging to confirm that the problem exists and, later, that you have solved the problem.

How to Find the Problem(s) by Inspection

Inspect the design drawings for recent modifications to the chilled-water system. Some things to look for:

Inspect the direct-digital-control (DDC) system to see if the pressure differential location and setpoint match the original design. Vary the pump speed either through the DDC system or locally at the VSD to see if the pressure reading varies. If it does not, you will need to locally inspect the sensor for proper installation and operation. The sensor may need to be repaired or replaced.

Make sure the cooling-coil valves are operating properly and closing as expected for each AHU. If the system was originally a constant-flow design with 3-way valves, make sure the valve operators were tested or replaced so that they shut off completely when the differential pressure in the system increases.

If the pump speed does not vary at all, make sure there is no short circuit in the piping system that allows supply water to enter the return-water piping without passing through an AHU coil. The first place to look is usually the last place the system was repaired or renovated. Sometimes bypasses are installed at AHUs to allow the system to be flushed out, or the system pressure to be tested.

Make sure the VSD controller is operating in automatic mode and not in local manual or bypass mode. If the controller is in bypass or manual mode, find out why before you return it to automatic operation.

Inspect the system for partially closed valves or clogged strainers. The pump may be trying to overcome a large pressure loss due to some obstruction.

How to Confirm the Problem(s) by Trend Logging

The graph below shows normal pump operation varying with system load. The load depends on OSAT, so the pump speed increases as the AHU(s) call for more cooling. The differential temperature of the chilled water increases due to the chilled-water reset schedule. If your graph looks similar to this, the problem should be solved. 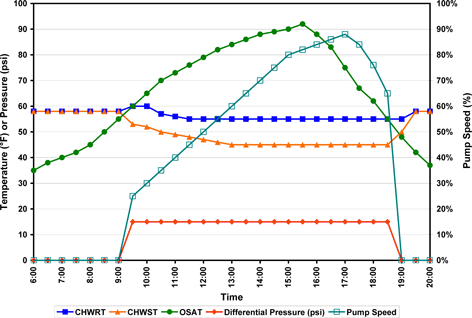 The graph below shows the pump speed constant at 80%. The differential pressure between supply and return varies greatly. If your graph looks like this, the automatic controls on your VSD may have been overridden, either by the DDC or locally at the unit. The differential pressure drops as AHUs call for more cooling by opening their control valves. Re-inspect the system starting from Inspection Step 2. 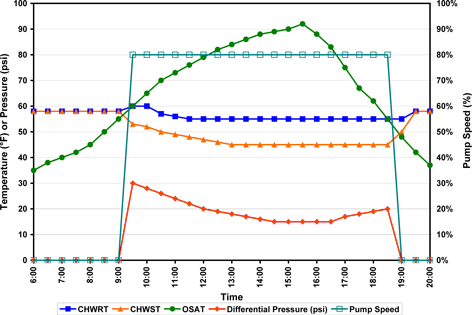 The graph below shows the pump speed constant at 100%. The differential pressure between supply and return is below the setpoint of 15 psi. If your graph looks like this, you may have a short circuit somewhere in the system, most likely well before the controller location in the piping. The return-water temperature may have dropped due to the short circuit, allowing the chiller to produce only a 5-degree differential.

Also, a clogged strainer or partially closed valve in the chilled-water plant could be creating a high pressure drop. If severe enough, it will also cause the chiller to trip offline due to low flow, and could appear as described in: 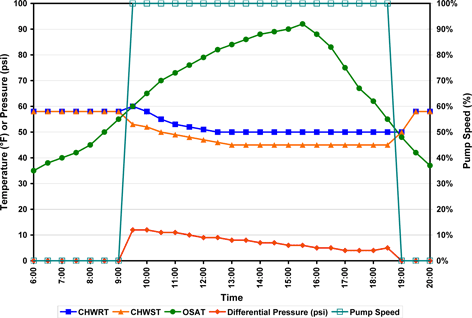 Labor Skills Required to Find and Resolve the Problem

Saving energy through better building operation starts with finding opportunities in five areas that have been shown to have the most frequent problems and the potential for the greatest benefits.

On the Path: Rating the Energy Performance of Commercial Buildings

For more than a generation, EPA fuel economy labels have allowed consumers to compare the potential environmental impact of a large selection of vehicles.

Simple Strategies to Maximize the Value of Commercial Energy Benchmarking

You can manage what you don measure.

Many large buildings and campuses have HVAC water-distribution systems, also called hydronic systems. Water is heated or cooled in a central plant, then pumped to air handlers, where ventilation air is conditioned as needed.

With experience in new construction, retrofits, and design/build assistance, you are well-positioned to take advantage of the Building Performance System (BPS) program to offer even more to your clients.