Many large buildings and campuses have HVAC water-distribution systems, also called hydronic systems. Water is heated or cooled in a central plant, then pumped to air handlers, where ventilation air is conditioned as needed.

Maintaining and optimizing the performance of pumps and valves-the key mechanical components of water-distribution systems-can be challenging. These systems often have hidden performance problems that waste energy and cause excessive wear on equipment.

As with other mechanical components of the HVAC system, a preventive and predictive maintenance plan is an excellent way to maintain an efficient system, save energy dollars, prevent costly breakdowns, and extend equipment life.

Water-distribution systems are either closed-loop (cooling- or heating-system water does not come in contact with outside air) or open-loop (condenser water is exposed to outside air, usually in the cooling tower). Water in a closed loop requires less treatment than water in an open system. 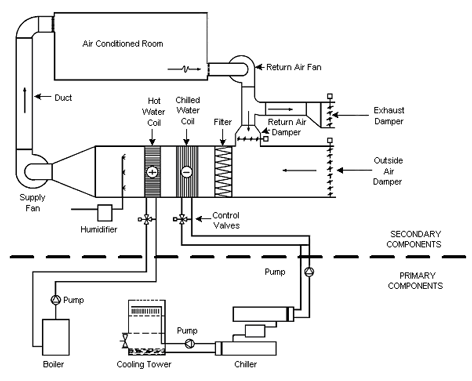 Learn more about Operation and Maintenance of Chillers.

Learn more about Operation and Maintenance of Boilers.

Learn more about Operation and Maintenance of Cooling Towers.

Water-loop heat pump: This hydronic system circulates water to individual water-to-air heat pumps throughout the building. Most heating and cooling is done by individual heat pumps serving the zones in which they're located. These heat pumps either take heat from the water loop or reject heat to the loop. In moderate weather, the water loop self-balances within a controlled range, usually 65-90°F. In hot weather, if the temperature of the loop exceeds 90°F, water in the loop will be diverted to a cooling tower. In cold weather, if the loop temperature drops below 65°F, the water will be diverted through a boiler to increase the water temperature in the loop. Hydronic heat pumps are typically closed-loop systems.

Constant flow: A constant flow rate is maintained throughout the hydronic loop whenever the system is operating. Flow rates are established for a peak design condition, which represents a small fraction of total operating hours.

Variable flow: Variable-flow pumping can be accomplished in several ways:

Modulating control valves: There are two valve types, two-way and three-way. Either type can be used for both constant-flow and variable-flow pumping.

There are several ways to combine the above system of pumps and valves to provide energy savings as compared to a single-loop constant-flow system. 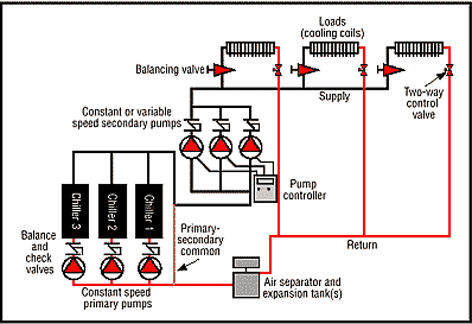 Pumps: HVAC water-distribution systems use centrifugal pumps. Centrifugal pumps have a rotating and a stationary component. The rotating section consists of an impeller and shaft; and the stationary section is the housing, which includes a casing, casing cover, and bearings. A motor spins the shaft and impeller, creating centrifugal force to increase the velocity of the water and push it through the volute (the curved funnel increasing in area) to the pump outlet. 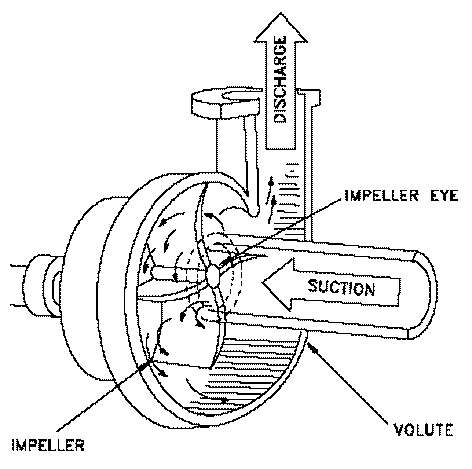 Balance valves, also called circuit setters, are a special type of regulating valve that limit flow at design conditions. This allows the system to be balanced so that every coil in the system has adequate flow. Excessive pressure drop across these valves can waste a considerable amount of energy.

Valve bodies are available in many configurations according to type of service. Regardless of function, the basic valve components are the body, seat, stem, and packing or gasket. Valve actuators control water flow through automatic valves in response to electronic or pneumatic control signals. 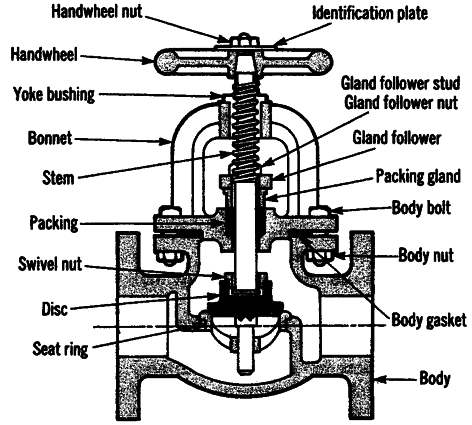 Working near rotating pump shafts and couplings can be dangerous. Control panels for electrical motors and electrical connections on pump motors present a shock hazard. Heating-water systems are dangerous if not fully insulated, so be careful not to touch uninsulated piping without first checking its temperature.

These best practices will help improve the performance of your water-distribution system and reduce operating costs:

Monitor the make-up water meter: A quick way to spot a leak in a closed-loop hydronic system is to monitor the meter on the system make-up water inlet. Reading the meter daily or weekly and comparing the readings to historical averages can help identify problems.

Investigate valve chatter: Valve chatter or water hammer coming from control valves may indicate overpressurization at the valve. High pump pressure or system imbalance can exceed the valve's actuator shut-off rating and cause water to pass through the "closed" valve and thereby cause the chatter. Water passing through a "closed" valve causes overcooling or overheating, thereby destabilizing control and wasting energy. Generally, the shut-off pressure limit for 2-way valves with vertical actuators should be 25% greater than maximum pump head. Two-way valves with rotating actuators use a much lower torque. Three-way valves do not need as high a limit as vertical 2-way valves since they simply divert flow. Rebalancing or, as a last resort, replacing the valve actuator with one with a suitable higher pressure limit may fix the problem. Confirm the correct operating parameters of the valves in your system before making any changes.

Confirm correct control setpoints: Pumps in a variable-flow system are controlled to maintain a minimum differential pressure across the coil for a critical zone or for the coil farthest from the central plant. Make sure the differential pressure setpoint for this coil (there could be more than one) is at the proper design value. Occasionally these setpoints are raised in an attempt to fix an unrelated problem and then forgotten, wasting pump energy.

Investigate parallel pumping: Most variable-flow systems have one on-line (or lead) pump and one standby (or lag) pump. At higher flow rates, it can be more energy efficient to operate both pumps in parallel. A typical control sequence is for the lead pump to operate alone until twice its minimum flow rate is reached, then the lag pump cycles on and the two pumps operate together in parallel on the same speed-control signal. An engineering professional should determine the best strategy for your particular system.

Pumps are a vital part of HVAC and process-load applications. Pump efficiency directly affects the efficiency of other system components.

Inspect system weekly: At least once a week, a building engineer should walk the entire system and check piping, valves, and pumps for leaks and unusual noise. Noise often indicates hidden valve or pump problems. Sources of noise include turbulence, cavitation, release of entrained air, and water hammer.

Inspect insulation: System efficiency is compromised if the distribution piping has inadequate, damaged, or wet insulation. Proper insulation can reduce radiant energy loss by as much as 90 to 95%. Removable lagging pads or snap-on insulation are available for parts such as valves that need periodic maintenance.

Maintain optimal condenser water flow: Most condenser-water systems include a strainer to remove larger material picked up in the open cooling tower. In areas with high particulate counts in the air, a side-stream mechanical filtration system is recommended to constantly filter the water and remove contaminants.

The table below provides a checklist for maintenance tasks.

For additional information on pumps, visit these sites sponsored by the Hydraulic Institute: www.pumplearning.org, www.pumps.org, and www.pumpsystemsmatter.org.

[Video] Very High Efficiency DOAS: How It Works and Why It Matters

In commercial buildings across the U.S., outdated or inefficient HVAC systems waste a staggering amount of energy and money, while also creating unhealthy and uncomfortable indoor environments. However, research and field studies have proven there’s an optimal approach to HVAC design that can significantly improve indoor air quality and occupant...

Smart Domestic Hot Water (DHW) Circulation Pumps use high efficiency variable speed motors and integrated controls to reduce the amount of energy used to circulate hot water in a commercial building. They are easy to install and have programmable controls to automatically adjust flow in response to hot water demand...

Garver was called to audit the pumping system of a facility with four large (350-horse power) vertical turbine pumps. “No cost” and “low cost” Energy Efficiency Measures (EEMs) were recommended as actions that would increase efficiency, reduce energy consumption, increase reliability, and lower the total cost of operation.

Pumps can account for 40% of industrial energy usage. Designing pump systems to reduce energy consumption is one step toward greater sustainability.

The Hydraulic Institute (HI)—in collaboration with NEEA, pump manufacturers, U.S. Department of Energy, and utilities—developed the HI Energy Rating (ER) Label. The label is designed to clearly indicate the power savings available from pump upgrades and changes. By using the label, manufacturers and distributors can quickly compare the relative power...