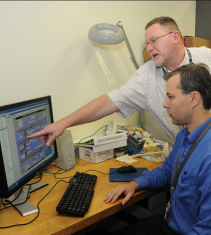 Saving energy is an important part of Bonneville Power Administration’s role in delivering power to Northwest communities. BPA promotes energy-efficiency programs and strategies to businesses and residences throughout the Northwest. The agency also understands the importance of identifying opportunities to address its own energy use.

According to Rodrigo George, BPA sustainability program manager, his work starts with a very basic principle: you can’t manage what you don’t measure. As part of an ambitious sustainability action plan, the federal wholesale electrical power marketing agency benchmarks energy performance at its headquarters facility in Northeast Portland.

With a 700,000-square-foot office building to manage, George knows that monitoring is the first step to controlling energy use and costs. Using the ENERGY STAR Portfolio Manager® tool, BPA tracks electricity, natural gas and water consumption. The agency currently has over five years of energy performance data in the system.

The agency’s effort to understand and control its energy consumption goes back to 2011. BPA was among the first in the region to take advantage of Energy Trust of Oregon’s Strategic Energy Management, SEM, initiative, which helped staff pinpoint areas of energy waste and adopt processes and behaviors to reduce consumption.

Where SEM and Kilowatt Crackdown helped BPA identify significant areas of improvement, benchmarking gives the agency real-time results. “We know where we’re meeting goals or falling short, so we can make decisions based on real data,” George continued.

“Our maintenance crews and facilities specialists now have more insight into our systems and how they operate,” he said. “This building was built in 1985 so our goal is to run it as efficiently as we can. Benchmarking tools give us the capability to track performance against goals, normalize results for weather, and compare performance year to year or against selected baselines.”

This kind of information is essential to BPA’s management plan and provides value to the agency in a broader context. BPA is an active board member in the Lloyd EcoDistrict, a coalition of businesses, residents and organizations in Northeast Portland committed to becoming the most sustainable district in North America. George chairs the LE3, the district’s commercial building energy-efficiency working group, and BPA shares its headquarters building performance data as part of

When faced with an an older HVAC system that was causing tenant discomfort, Portland-based restaurant Verde Cocina turned to an innovative HVAC approach that would reduce their energy costs while improving their customer experience.

High-Performance HVAC Gets to Work for Utility Office

Flathead Electric’s district office is a single-story 1960s-vintage building with offices at the front and a combination of storage space and garage bays for utility trucks in the back. Their former HVAC system had been pieced together from several years of changes and modifications and it was no longer providing indoor comfort or an adequate level of heating efficiency. Flathead Electric took advantage of an innovative approach to HVAC they knew all to well—a very high efficiency dedicated outside air system (also referred to as very high efficiency DOAS).