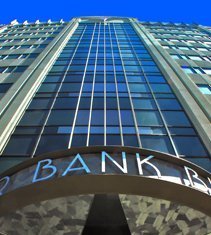 The Banner Bank Building is a model for high performance buildings in the US. Energy efficiency strategies were considered from the whole building scale, such as under floor air distribution (UFAD) with evaporative pre-cooling, to the finest details, such as eliminating light switches in favor of individual computer controls.

With a total of 180,000 square feet, made up of eleven floors, this building added a significant amount of class-A office space to the Boise area and is delivering a high quality environment that uses almost half the energy at typical rental market rates. Due to its enhanced interior environment and competitive lease rates, the building has leased up faster than its competitors.

“We created a beautiful, high-performance building that’s good for the environment. And it didn’t cost us any more to do it.” - Gary Christensen, Owner Christensen Corp.

The art-deco inspired building is the first LEED Platinum building in Idaho, earning 49 out of 62 possible LEED credits in the Core & Shell category. Worldwide, Banner Bank was the 16th Platinum building but the first speculative office building to achieve this level. It earned all ten of the “Optimizing Energy Performance” credits under the Energy and Atmosphere section of the LEED checklist, showing Core & Shell modeled energy savings of over 50%. The building’s Energy Use Index (EUI) is 37 kBTU / FT2•YR as compared to an average office building in Idaho which uses 89 kBTU / FT2•YR. The reduction in energy use offsets approximately 721 tons of CO2 per year-the equivalent of removing 139 cars from the road per year.

Under Floor Air Distribution. The building is equipped with an underflow air system with a pressurized plenum space for ventilation supply air, thus delivering air closer to the occupants with less fan power and minimizing the air change requirement. Vents and outlets can easily be placed at each individual’s workstation, providing excellent access to fresh air and individual temperature control. The raised floor system allows the building to use outside air for cooling for more than 200 extra hours per year because the air is delivered at approximately 62-67° F, while a typical overhead system supplies air at 55-59° F. This system also improves indoor air quality because it takes advantage of stratification and a ceiling return plenum to remove stale air without mixing it with the supply air.

Cooling. Since the underfloor air is delivered close to the users, it can be delivered at a higher temperature requiring less cooling energy. On the roof top unit, evaporative cooling cassettes pre-cool the air before it passes through the chiller reducing energy use because the chiller does not have to work as hard. Further, this technology helped to reduce total first cost in two ways. First, these technologies allowed for a smaller, less expensive and more lightweight chiller. Second, the smaller chiller allowed for smaller less expensive structural members.

Heating. Geothermal heating is integrated with the under-floor air distribution system. Heat from the 170º F geothermal water supply is transferred to a closed water loop that runs through the building. The geothermal water is then recharged into the ground.

Envelope. Spectrally selective high performance glazing was used throughout. This glass is effective at keeping the heat outside in the summer and inside during the winter while allowing a large amount of visible light to penetrate the building for further electric lighting savings and increased user preference.

Daylight Harvesting. The open floor plan allows daylight to penetrate deeper into the space, uninterrupted by columns or permanent hard walls. The windows are all fitted with 2-inch aluminum louver blinds which act as mini light shelves to help redirect light toward the ceiling to increase perceived brightness while also eliminating users’ line of sight to the sun and minimizing glare.

Through the Banner Bank Building, the Christensen Corporation has proven that ‘building green’ increases profitability for owners right out of the chute, and suggests that higher profitability will be enjoyed over the life of the building due to energy cost reductions and lower churn rates. Several current tenants at the Banner Bank Building have indicated that the “green building features” were an important factor in their decision to move their business into the building. When it comes time, a higher sale price is expected for the building (net asset value) due to lower operating costs, higher tenant satisfaction, and higher occupancy rates.

The core and shell building has large open floor plates, uninterrupted by structural components. Large 27-inch deep castellated beams were used to clear span from the core to the perimeter. These beams span longer distances than normal wide flange beams while using 12% (234,000 pounds) less steel. The decision to use the castellated beams also cut the cost for columns because fewer were required. The open floor plates allow tenants to easily modify their interior spaces with minimal expense.

Leasing Benefits. The building leased up quickly, achieving nearly 90% occupancy in the first 12 months of operation while other buildings in downtown Boise are experiencing 24-48 month periods to achieve the same occupancy. Further, the building is enjoying a 70% realization ratio for prospective tenants. This is largely due to the enhanced interior environment, flexible space layout options, and lower triple net and tenant improvement costs. Operating expenses are more than $1.00/SF lower at the Banner Bank Building than other typical Class A office space in Boise.

Recycled Content. More than 90% of the debris from demolition (pre-existing parking garage) and construction was separated, recycled and documented. The building is constructed of over 42% recycled materials.

Water Reduction. The building is equipped with a 20,000 gallon cistern (water storage tank). Storm-water is directed from a 7-block diameter to the graywater treatment center in the building. The water then fills the storage tank and is used for on-site irrigation and toilets. The building uses 80% less water than a similar office building of comparable size.

Transportation: The building is located less than 200 yards away from a bus stop and includes indoor bike parking and shower stalls to provide alternate transportation opportunities for all the occupants of the building.

Owner Pushes Design Team. Gary Christensen, CEO of Christensen Corporation, challenged the design team to think outside the box and to not approach the project as business as usual. All the players came together, and at Gary’s urging, made daylighting and lighting controls a top priority while engaging in a design process that considered the full impact of their decisions and did not accept seemingly high first costs as a deal breaker. Christensen also promotes the use of a building rating system such as LEED because it helps designer/owner teams set higher goals and gives some guidance for the realization of those goals. For Banner Bank, achieving LEED Platinum has also brought international attention to Christensen Corporation, their design team and the community of Boise. This success story has extended Christensen Corporation’s business model to client groups and development opportunities that were not available previously.

Importance of Commissioning: Christensen also indicated that the 0.05% of the project budget spent for 3rd party commissioning was well worth the investment. Specifically, systems were balanced, controls and operating sequences were tweaked, extra ceiling return diffusers were recommended and additional training on operating the lighting system helped to realize the energy savings potential in the design.

Things that Could Be Improved: Christensen indicated that the storm water reclaim system was not yet performing satisfactorily and he may think twice before attempting a system like it again. Further, it has taken careful planning to balance the HVAC equipment in conjunction with an UFAD system, as tenants are moving in to various spaces. The UFAD system pressurization changes as spaces are fitted with carpet tile as tenant improvements are completed.

The South Landing Development: A Bold Vision for a Sustainable Future

The South Landing development in Spokane, Wash., began with a bold vision from Avista’s Chairman and then CEO Scott Morris. When Morris learned the University District Gateway Bridge would land on Avista’s property, he knew it was a golden opportunity to create what he envisioned as “the five smartest blocks in the world.”

The South Landing development in Spokane, Wash., demonstrates how utility and building operators can work together to create transformative new models for energy, the built environment, and sustainability that reduce energy demand and increase energy efficiency.

The South Landing development serves as the latest example of Avista’s commitment to serve its customers across eastern Washington, northern Idaho and southern Oregon with a carbon-neutral supply of electricity by the end of 2027, and carbon-free electricity by 2045.

The South Landing Development: Ambitious Reductions in Carbon and Energy Use