A City on the Move 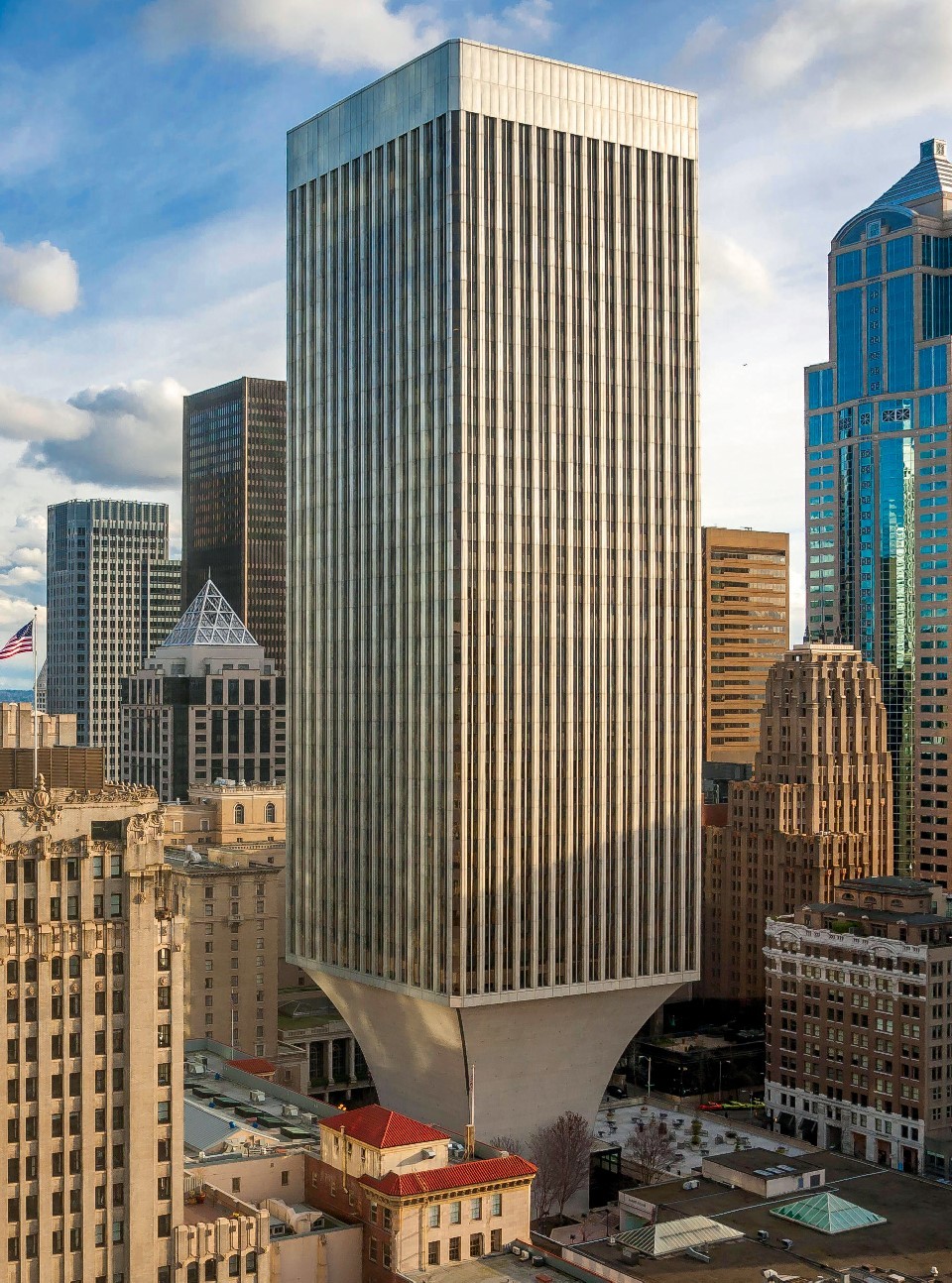 Shanghai, Stockholm…Seattle? The Emerald City is rapidly  entering  the ranks of global cities. The  region  is home to some of the world’s largest tech companies and there are construction cranes on virtually every corner of the city center. With all these new buildings coming, what is happening to yesterday’s prime office space?

Rainier Tower is one of Seattle’s most recognizable structures, with a unique, inverted pyramid for a pedestal. The 42-story tower, designed by World Trade Center architect Minoru Yamasaki in 1977, contains 563,702 rentable square feet of Class A office and retail. That space is in high demand in such a hot commercial market. But new construction, including a new Rainier Square skyscraper on the same block, is raising the bar for the best tenants.

Large corporate and government clients are increasingly demanding their spaces be sustainably built and managed. The previous management of Rainier Tower, Unico, turned to Seattle City Light and BetterBricks for advice in preserving the building’s trophy status.

Stage One: Technical and Financial Analysis

BetterBricks assembled a top team including Solarc Architecture and Engineering, the University of Washington Integrated Design Lab and TBD Consulting to create a comprehensive, technical analysis of Rainier Tower. The analysis included a range of options for upgrading the building systems and reducing energy use.

The Integrated Measure Package (IMP) was defined in a manner where implementation could be accomplished while the building remains fully occupied. A logical order to getting started was presented to guide implementation of the individual measures in the IMP.

Before Unico began renovations, Wright Runstad & Company was awarded management of the building. Unico provided the report from BetterBricks, but Rainier Square, partially serviced by Rainier Tower, was slated to undergo a massive transformation. “At  the time, the  owner wasn’t quite ready to do those recommendations. Rainier Square redevelopment was under review” said Daren Greene, chief engineer at Wright Runstad & Company.

Construction is planned for Rainier Square, a mixed-used skyscraper that will become Seattle’s second-tallest building. At the same time, Rainier Tower building management is ready to pursue the recommendations laid out by BetterBricks.

Wright Runstad & Company chose to focus on the building’s HVAC system first and installed six variable frequency drive fans (VFDs). “I realized it was running way too hot, way too hard and we needed better control,” said Forest Faulkner, senior building engineer for Rainier Tower. “The VFDs were an easy way to get much better control and ramp the building down,” he continued.

“This specific project was picked because it was low-hanging fruit,” said Greene. “We had fans that were hard starting, 480-volt high-horsepower fans and we knew if we put VFDs on them, and were better able to control them, then we could see significant energy savings.”

Selling the upgrade to management wasn’t a big lift. “With this type of project and the engineering that went into it, the payback and the rebate really sold this project to the asset manager,” said Greene.

The disruption to tenants was virtually nonexistent. “All the work was done in the middle of the night and we had everything back online in the morning,” said Faulkner. “We were able to do the installs and get the control work done on all of them and tenants didn’t have any idea what was going on.” The total project cost $241,120, with $96,013 in funding from Seattle City Light.

“Seattle City Light is committed to co-funding projects like this one that promote savings,” said Craig Smith, Director of the Customer Energy Solutions Division. “Not only does it help the utility manage load growth and lower long-term costs for all ratepayers, but it also helps participating customers lower their operating cost.”

Rainier Tower building management sets an annual energy budget for heating and cooling the building. During the first half of the year, they were running well over budget. Since installing the new VFDs, they’re back in the black. “I’ve been really surprised at how far down I’ve been able to turn everything while still seeing a lot fewer comfort complaints,” said Faulkner. “It’s just a lot more comfortable building.”

Seattle City Light contracted with Wright Runstad & Company to save 355,602 kWh/year but the fans were so efficient that the actual savings were 942,763 kWh/year. “The whole thing has turned out to work better than the engineer had penciled out,” said Faulkner.

With just one measure of the IMP implemented, Rainier Tower now has a level of comfort that high-end tenants expect. Wright Runstad & Company is looking forward to tackling more efficiency projects. “These six fans were just a glaring red light to us to look at right away. Moving forward, we have pinpointed several opportunities for energy savings for this property. The next one we’re looking at is the chiller plant,” said Greene.

High-Performance HVAC Gets to Work for Utility Office

Flathead Electric’s district office is a single-story 1960s-vintage building with offices at the front and a combination of storage space and garage bays for utility trucks in the back. Their former HVAC system had been pieced together from several years of changes and modifications and it was no longer providing indoor comfort or an adequate level of heating efficiency. Flathead Electric took advantage of an innovative approach to HVAC they knew all to well—a very high efficiency dedicated outside air system (also referred to as very high efficiency DOAS).

Pizza Restaurant Takes a Slice out of Energy Waste and Discomfort

The owners of a popular pizza restaurant in Corvallis, Ore., experienced high energy bills and poor ventilation and airflow — a particularly vexing issue for businesses with commercial kitchens. Many culprits were to blame for these issues, including leaky and poorly insulated walls, large make-up and exhaust air openings from the venting system that serves the pizza oven, and a number of additional air supply and exhaust pathways that weren’t in service but nonetheless resulted in significant air leakage.